Members of the CPC are intended to represent the entire European and international CP/CD market ecosystem, including: issuers (both financial and corporate); investors; dealers and originators; and infrastructures.

Contributions to consultations and various other published documents from the former ICMA Euro Commercial Paper (ECP) committee can be found here. 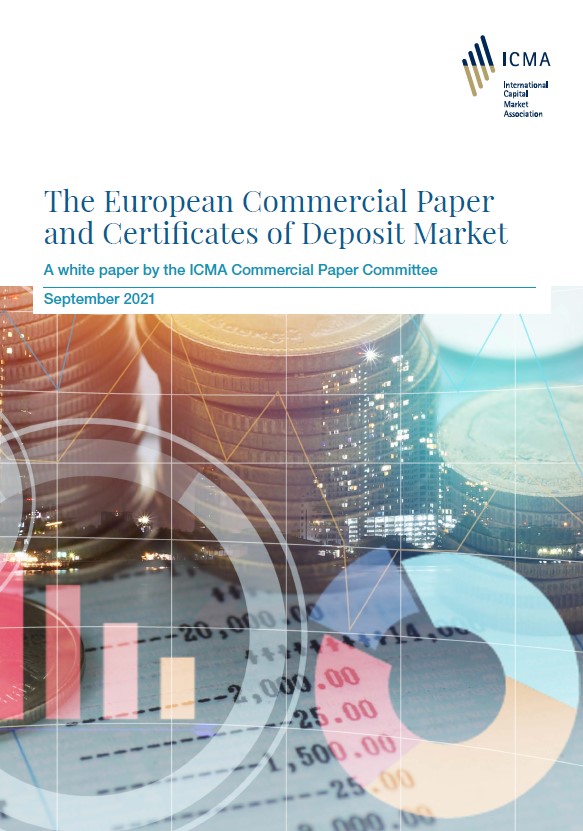 On 29 September 2021, ICMA published a white paper paper on the European Commercial Paper and Certificates of Deposit Market. The paper is an initiative of ICMA’s Commercial Paper (and Certificates of Deposit) Committee (CPC). The paper attempts to: (i) map the landscape of the European commercial paper (CP) and certificates of deposit (CD) markets; (ii) describe how the CP market performed during the Covid-related turmoil of March-April 2020 and after; and (iii) propose initiatives that could support the development of market structure and enhance resilience, particularly in the event of future shock.

September 2021: FSB meeting with the CPC to discuss how the European CP market performed during the covid turmoil

On 1 September 2021, Edwin Schooling Latter (FCA & FSB) joined a special meeting of the CPC to discuss with members how the market performed during and since the covid turmoil of March-April 2020, and lessons learned. Edwin co-chairs the FSB’s Working Group on Dealer Behaviour, which is looking at participant experiences in short-term funding markets, in particular during the pandemic.

On 30 June 2021, ICMA responded to ESMA's consultation on potential reforms of the EU Money Market Funds Regulation (MMFR). Our Asset Management and Investors Council (AMIC), the buy-side voice of ICMA, mainly drafted this response. It also draws on the work done by ICMA’s Commercial Paper Committee and its upcoming white paper on the European Commercial Paper and Certificates of Deposit Market.

At an online meeting to discuss the scope, structure, and immediate deliverables held on 2 March 2021, members agreed the proposal to reconstitute the ICMA ECP Committee as the ICMA Commercial Paper (and Certificates of Deposit) Committee (CPC).

It was further agreed that an initial output of the CPC would be a white paper that: (i) outlines the market landscape and structure pre-2020, highlighting any potential vulnerabilities. (ii) describes what happened during the and following the March/April 2020 market turmoil (with reference to different central bank interventions); and (iii) provides recommendations for market development based on the lessons learned.

Note of the meeting

Following the ICMA European Commercial Paper workshop in November 2020 and follow-up call in December 2020, it was proposed that ICMA’s executive committee:

In November 2020, in response to member interest, ICMA hosted a workshop entitled The European Commercial Paper Market Reimagined. The objectives of the workshop were: (i) to look back on how the European Commercial Paper (CP) market performed during the peak of the COVID-19 crisis, and (ii) to identify possible initiatives, whether market-based or regulatory, that could help in developing the market. Participants in the workshop included issuers (financial and corporate), investors (including money market funds), dealers, and infrastructures. ICMA has published a note of the workshop, which was held under Chatham House Rules.