The annual winter gathering of the ICMA Region for Switzerland & Liechtenstein, a tradition which spans over four decades, once again took place in 2023 in Zermatt on 20 - 22 January following a two-year absence.

The event brought together around 100 regional representatives from across Europe including from the UK, Germany, France, Austria, Luxembourg, Denmark and Switzerland, among others, making it an ideal opportunity to network, exchange views and experiences with peers in the cross-border bond market and the Switzerland and Liechtenstein capital market community.

Open to ICMA's entire global membership, as well as to non-members, the 2023 event featured ski and snow boarding races in addition to a lunch and evening reception.

Results of the ski race

On the Italian border of the canton of Valais in the west of Switzerland, at the end of the 30 km-long Nikolaital, lies Zermatt, the village at the foot of the Matterhorn, the most photographed mountain in the world. Zermatt epitomizes their image of Switzerland; high-alpine, awe-inspiring and original. Almost one-third of the 4,000-metre mountains in the alps are grouped around this world-famous health resort, which has been visited by mountaineers from all around the world since the first successful ascent of the Matterhorn in 1865. The hotels are restaurants are world-class, and the ski area is not only the highest in the Alps - it is also one of the best developed and most convenient in the world, ensuring thrilling sporting experiences on the steepest slopes in the world - and that 365 days a year. The climate is of an excellent quality: with 300 sunny days a year, there is less rainfall than anywhere else in Switzerland. The air in Zermatt is clear, dry and clean, because, since 1947, only electric cars without a combustion engine are allowed to operate in the village. 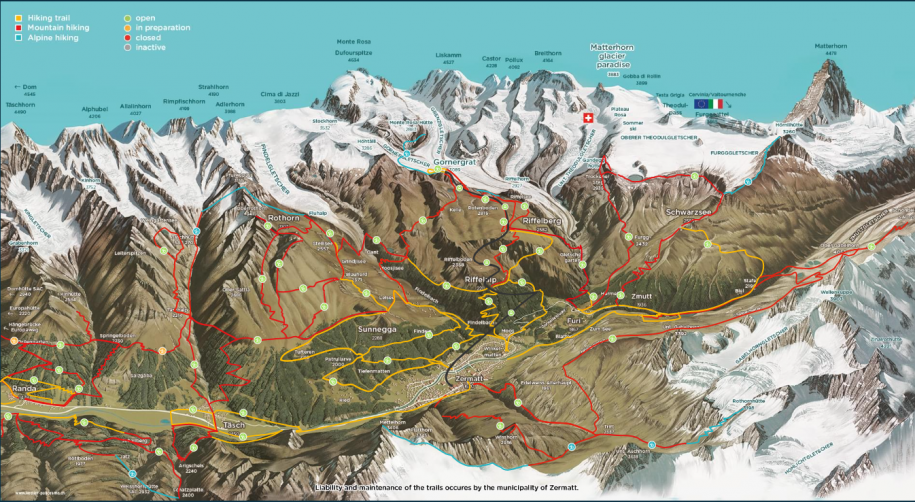